With 67 nationalities, is this Ireland’s most diverse school?

Le Chéile in Tyrrelstown has 67 different nationalities among its student body. What are the challenges and opportunities posed by such diversity in a school? 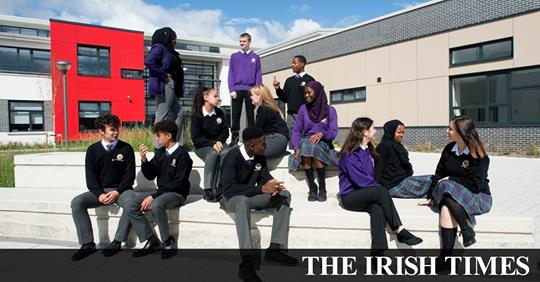 It was Friday, November 13th, 2015, the night of a co-ordinated terrorist attack in Paris. Le Chéile Secondary School in Tyrrelstown, northwest Dublin, had been open for just over a year and, despite its Catholic ethos, students had enrolled from all different nationalities and religions.

From the start, Le Chéile had embraced innovative ways of learning, getting rid of textbooks and creating its own learning resources on iPads. Using a platform called Schoology, the students could share lessons, communicate with their teachers and talk to each other. But that weekend, the principal, Dr Áine Moran, looked on in concern as racial and religious tensions threatened to flare up online.

One of the students went on the school’s platform and mentioned a report that Syrian and Egyptian passports had been found and that they belonged to the attackers (it later transpired that the Egyptian passport belonged to a victim while the Syrian passport may have been forged or planted). Another student jumped in to counter this and, as can happen online, an argument about race and religion threatened to spill over into real life.

“We hadn’t seen this kind of spat before,” says Moran. “We only had first and second years in the school at this stage and we weren’t immediately sure what to do. We decided we would intervene if we needed to. But, very quickly, one of our Muslim students helped dissolve any tensions.

“She suggested that we should all pray together and offered to organise a non-denominational prayer and reflection service for everyone, focused on bringing people together where they were increasingly divided elsewhere.

“The students themselves organised the service, placing the Bible, Torah, Qu’ran, and mandalas [from Hinduism and Buddhism] in the centre of our non-denominational prayer room. We also did some colouring as a reflective and calming exercise.”

The potential flashpoint dissipated and since then the school has consciously worked to promote harmony and diversity.

Tyrrelstown is a relatively new community on the border of Meath, with an almost ever-present hum from aeroplanes coming to and from Dublin airport. A planned town that began to grow in the early part of the last decade, it’s close to Blanchardstown and the more socially deprived areas of Corduff and Mulhuddart.

According to the 2016 census, over 40 per cent of its population were born outside the State. At primary level, the area is served by two Educate Together national schools, a Catholic school and a Gaelscoil. Socially, the local population comes from both professional and working class backgrounds, with major local employers including Connolly Hospital and IT firms such as IBM.

“We were among the first schools where the parents were allowed to choose the patron,” says Moran. “This is one of the most pluralist parts of pluralist Dublin in an increasingly pluralist Ireland. Everybody expected that they would opt for a non-denominational secondary. It was a big surprise when they chose a Catholic school.”

Last May, Taoiseach Leo Varadkar, who represents the constituency, formally opened the only secondary school in Tyrrelstown, which had taken in its first students back in 2014. He arrived at what is likely, with at least 67 different nationalities from all corners of the globe, Ireland’s most diverse school. Many of the young people here have either arrived directly from their country of birth, or they are the first generation of their family to be born in Ireland. A small number of them have grown up in direct provision and five students are unaccompanied minors who fled war or poverty and arrived in Ireland alone.

It is a highly populated and very diverse community, which can be both a positive and a negative

A new community such as Tyrrelstown offers a chance to build a special place, or to make the same mistakes that blighted poorly planned communities such as Ballymun. “It is a highly populated and very diverse community, which can be both a positive and a negative,” says Michaela Solinas (17), a student at Le Chéile who sits on the council of Foróige, a national youth group. “The problem is that most people don’t know their neighbours.”

According to Stephen Balaneasa (17), whose family are originally from Romania, “There can be a tendency for different ethnic groups to not interact.”

But, says Niamh O’Connor (15), there’s less division in school. “Once you get to know your classmates, what you see is their personality, and there’s way less splitting up into groups – as well as less fights.”

In recent years, the media has reported on some anti-social behaviour carried out by teenagers of all ethnicities in Tyrrelstown, especially males. But, say the students, the problems in Tyrrelstown are relatively minor and often overblown.

“Yes, there is some anti-social behaviour in the community but also a lot of work being done to counter it,” says Jessica Odemena (15), who has an Irish mother and Nigerian father. “I’ve had friends standing at a tree being chased away and accused of anti-social behaviour.”

The young people resent how their astroturf pitch was taken from them. “The boys, in particular, used that pitch,” says O’Connor. “When it was removed, they played on greens outside houses and the neighbours were annoyed and said that they were hitting their windows, but it was accidental.”